In a nutshell:
Juicy and hazy Pale Ale from 360° Brewing of East Sussex.

The lowdown:
This is a double dry hopped hazy Pale Ale brewed by 360 Degree Brewing of East Sussex. The use of oats and wheat in the mash provide a pillowy texture and support the intense grapefruit, citrus and tropical flavours brought by the duo of Citra and Mosaic hops. 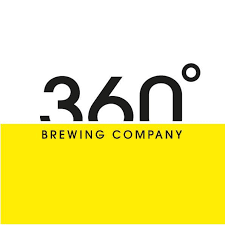 360° Brewing come from Sheffield Park in East Sussex, the brewery sits close to the southern end of the Bluebell Line heritage railway. The were founded in 2013, the first couple of years as a very small, part-time operation. During that time however they were building their range and engaging with their local community to brew beers they enjoyed drinking. While they stayed pretty local for the first few years by 2016 they'd been able to increase their brewing capacity and were able to start selling their beers further afield. Innovation and new beers followed and today they're justly proud of their wide range of craft beer and ale. Some are diverse, some new, some bold and juicy, some challenging and some classic, but, all are great quality and made with attention to detail and real care.